What Does Fitch Ratings Know About War in The Middle East?

The credit rating agency Fitch Ratings took the credit market by surprise when it unexpectedly announced it was downgrading Saudi Arabia’s debt credit rating to A from A+ on September 30th. The last time Fitch rated Saudi Arabia at this level was back in 2005. The outlook on the rating had previously been “stable,” meaning Fitch anticipated no rating change following the surprise attack on the country’s oil facilities on September 14th. Fitch specifically cited a risk of future attacks on the country as a reason for the credit rating downgrade.

Fitch’s press release said, “The downgrade reflects rising geopolitical and military tensions in the Gulf region, [and] Fitch's revised assessment of the vulnerability of Saudi Arabia's economic infrastructure … We see a risk that the US and Saudi Arabia could be drawn into a deeper conflict with Iran, as Iran or groups linked to Iran continue to seek to break the diplomatic impasse over regional security and nuclear issues.”

It seems a bold step to downgrade a country’s credit rating on anticipation that it could be attacked again, in the same manner, or same degree as was the case in mid-September. Surely the attack on the Aramco oil facility got the attention of Saudi leadership, and they are taking measures to shore up the country’s defences. Fitch analysts would need superior insight into the political workings of Iran, or groups linked to Iran, to have a real understanding of what might transpire in the murky world of mid-east politics.

Instead, what is most likely to happen is that the rating will be revised up once things calm down. Furthermore, tensions with Iran may be moved to back burner as President Trump now faces a Congressional impeachment inquiry and possible hearing. The removal of policy hawk John Bolton from the administration is another factor that lessens the threat of a military strike against Iran. Additionally, Bloomberg reports that Aramco has already fully restored oil output as the company recovers from the missile attack on its facilities - a decisive factor for the country’s oil-based revenues.

The iShares MSCI Saudi Arabia ETF (AMEX: KSA) is still up 4.8% in 2019 despite the attack on the country and is up 2.4% since the September 14th attack. From a technical perspective Saudi is arguably weak, a fact confirmed on July 24th when the fast line of the MACD technical indicator moved below the neutral zero level and reinforced on August 4th when the 21-day exponential moving average crossed the 55-day simple moving average. 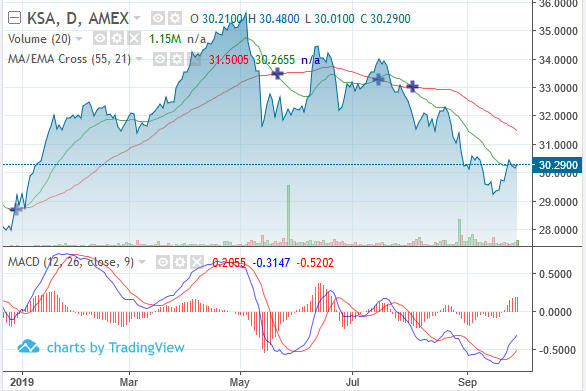 Saudi is far from a buying opportunity, but the downgrade of the country’s credit rating seems pre-mature and is putting pressure on the country’s equity market at a time when things actually seem to be recovering. While there is no way to guarantee that another event will not occur, it seems now may not be the time to throw in the towel on Saudi.