US Fed Under Pressure to Slash Rates - Will They Buckle?

This time last year, many Wall Street analysts and economists were expecting the central bank of the United States, also called the Federal Reserve Bank, or just the Fed, to increase short-term borrowing costs to keep the economy from overheating. What a difference a year makes. Those same economists now expect the Fed to aggressively lower short-term borrowing costs to avoid a potential economic recession in 2020. The big question is whether now is the time to lower borrowing costs and stimulate both the economy and the stock market.

The Fed has two jobs – to control price inflation and to stimulate economic growth. They do this job by setting the level of short-term interest rates in the economy at a monthly meeting – cutting rates to stimulate growth and raising rates to control inflation. The market and the US President are signalling their belief that it is time for the Fed to reduce borrowing costs and stimulate economic growth. The problem is that there does not yet seem to be a compelling reason to cut short-term interest rates.

The Fed says they will make their rate decisions based on macroeconomic data, but US data does not seem to be problematic right now. For example, inflation data for May from the US Bureau of Labour Statistics showed US prices rose 1.8% from a year ago, slightly above their 10-year average rate of 1.6%. The inflation trend has been down in recent months, but not below the 10-year average and perhaps not to a level that justifies an aggressive reduction in borrowing costs. 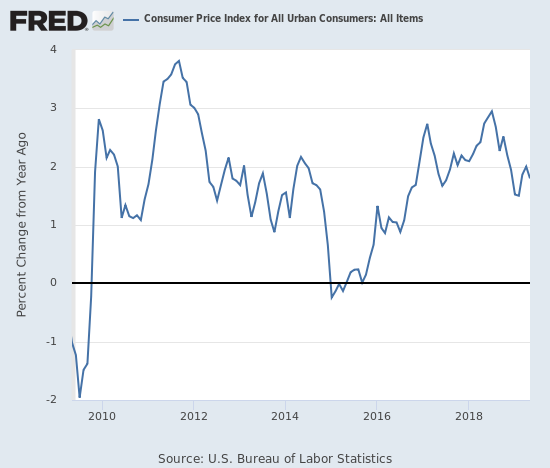 Economic growth is also holding up. Data from the US Bureau of Economic Analysis showed an expansion of 3.1% in Gross Domestic Product (GDP) in 1Q-2019, which is an acceleration from 2.2% in 4Q-2018. GDP growth is in an upward trend and has been since 4Q-2015. Rising GDP growth does not seem to indicate now is the time for additional stimulus. 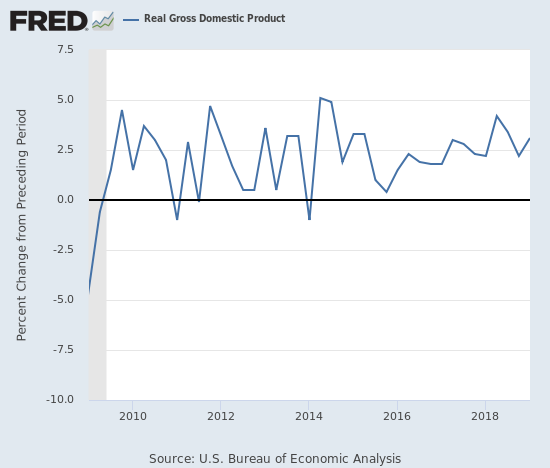 The Fed is facing significant pressure from both the market and the White House to aggressively cut rates this year, starting at its next meeting on July 30-31. The Fed is an independent body, but Donald Trump often tweets that it is time to cut rates and has allegedly explored ways to remove or demote the Fed Governor for not doing as the President wants. The market is also signalling its desire for lower rates, pushing equity prices up approximately 20% this year.

The Fed says they make their decisions based on macroeconomic data. The trouble is that inflation and GDP data is not yet signalling now is the time for an interest rate cut. Markets will be keenly watching the next Fed meeting to see if they buckle under the pressure.