Suez Canal Blockage Only a Distraction for Oil Markets

The containership that ran aground in the Suez Canal on March 23 and is currently blocking this key trade route is sending ripples through global commodity markets. Oil prices remain volatile, vacillating +/- 4% in recent days over concerns that the blockage may last weeks and tighten global supply. On the one hand, tight oil supplies weigh against rising Covid-19 cases in Europe that may impact demand.

With uncertainty over European oil demand creeping back into the market, analysts are focused on the critical importance of the April 1 OPEC+ meeting, which experts expect to reveal the cartel’s production plans from May 2021 onwards. Vandana Hari, CEO of Vanda Insights, told Platts on March 26 that “demand fears remain in the driver seat, which is why we have seen the Brent market getting stuck in the lower half of the $60-$70 per barrel range.” Regarding the upcoming OPEC+ meeting, Hari said “my personal opinion is that the coalition will not ease its quotas, keeping supply tight.” 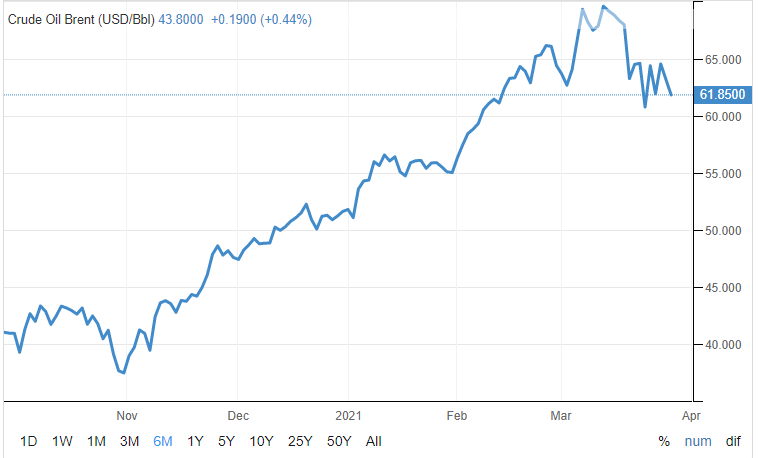 With weak demand fears currently outweighing tightening supply concerns, the rise in oil prices from the Suez Canal logjam could prove short-lived, leaving Brent again to test the $60 per barrel support level once things there are cleared up. With pressure on oil prices in mind, OPEC+ (which includes Russia) will likely extend its oil production cuts at its April 1 meeting. Since the initial production cuts announced in May 2020, the US Energy Information Administration (EIA) has reduced its annual average 2021 OPEC crude oil production forecast by 1.6 million barrels per day (b/d) to 26.8 million b/d.

Ironically, Russia (a major oil producer) will release 4Q20 GDP data on the same day as the OPEC+ meeting, where analysts anticipate the economy contracted by 2% quarter-on-quarter. The lower economic contraction in 4Q will be an improvement to 3Q20 when the economy shrank 3.4%, and much better than the 8% contraction in 2Q20 at the height of the global Covid pandemic. Russia will be keen to support higher oil prices to prop up its economy and push OPEC to maintain supply curbs at the April meeting.

Perhaps investors will take a closer look at Russia as an investment opportunity if OPEC+ comes through on oil supply curbs that support higher prices. Over the last year, the iShares MSCI Russia ETF (AMEX: ERUS) is up just over 46%, which is well ahead of pure-play oil-linked ETFs like the United States Oil Fund LP (AMEX: USO), which is up just over 16% in the same one year period.