It seems there is a new story every day about the impending global economic slowdown and imminent US stock market correction. Last week US non-farm jobs grew in August at the slowest annual pace in the previous seven years (see chart). The weak jobs number came on top of a slowing US manufacturing purchasing managers survey that showed a contraction for the first time since January 2016. Weak indicators like these have investors climbing a wall of worry, but it is not apparent which factors matter and which do not. 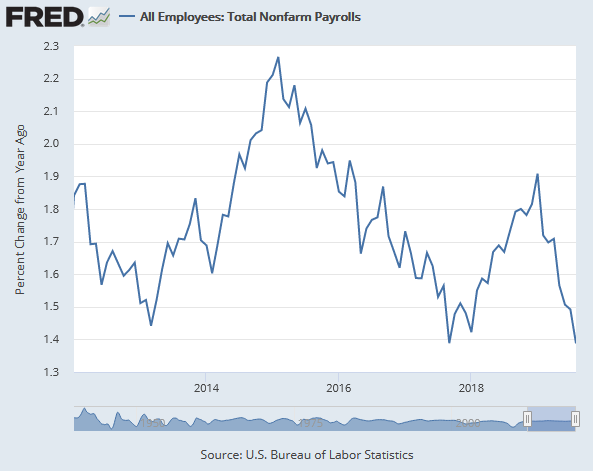 The rolling trade dispute between the US and China is a significant source of concern for investors. It creates economic headwinds that are no help to anyone. Unfortunately, there does not seem to be a clear path forward to end this dispute primarily because the major sticking point for the US is the issue of intellectual property and forced technology transfer. Investors should expect this to be a significant market theme for a while.

A symptom of the trade dispute is the impact it is having on the Chinese economy. The Chinese economy grew at an annual rate of 6.2% in 2Q19 and was the slowest growth rate since the first quarter of 1992. The government knows this is a problem and is deeply concerned about socio-economic stability. To help mitigate the effects of the trade dispute, the government directed the central bank to reduce banks’ reserve ratios and free up $126 billion for loans and investments. Investors should worry if the US knocks China’s economy into recession. The high Chinese corporate debt load could make things a lot worse.

Economists and other market analysts believe that an inverted yield curve tends to be a precursor to an economic recession because it signals that the market expects low inflation and slow economic growth. On average, an economic downturn tends to follow a yield curve inversion in about 18 months, so investors are right to worry about a flat or inverted US yield curve that started this summer. (For more see: Is the US Economy Really on the Verge of Recession?)

The “pro-democracy” protests in Hong Kong do not seem to be slowing down despite the local government giving in to demands to withdraw a controversial piece of legislation that would have made it possible for the government in Beijing to extradite suspects from Hong Kong. The longer these protests go on, the more damage it does to Hong Kong’s reputation as a pro-business friendly environment. Saudi Aramco is in the market for a place to conduct its IPO and said it is no longer considering Hong Kong. Investors may shy away in the short-term, but this is not likely to be a trend.

Economists define an earnings recession as two straight quarters of year-over-year earnings-per-share declines. Following the second-quarter earnings season, S&ampP 500 companies reported a 0.3% decline in profits after a 0.2% decline in the first quarter of 2019. The trend of contracting earnings growth has some analysts worried that the third quarter could be even worse. If this trend accelerates, a stock market correction may not be too far behind.