Markets are likely to get a boost from the news over the weekend that the US and China agreed to restart trade talks at the G20 economic summit in Osaka Japan over the weekend. While the US said it would not lift existing import tariffs on Chinese goods, it will refrain from introducing new tariffs on the remaining $300 billion worth of Chinese exports to the US.

With the stock market poised to continue its 10-year bull run on the back of this trade news, investors are rightly asking if now is the time to put more money to work in cyclical industries like technology, consumer discretionary and industrials. Alternatively, would it be more prudent to listen to macroeconomists who say that the US could slip into recession in 2020? Prospects of an economic slowdown suggest investors might be better off positioning in more defensive sectors like consumer staples, utilities, and banks to generate excess returns.

What To Watch in the Macroeconomy?

Understanding the economic cycle is as much art as it is science. Some investors who are interested in using it to make investment decisions employ what is known as the sector rotation theory. This investment style examines relevant macroeconomic data such as consumer confidence, industrial production, and interest rates to gauge the health of the economy, which tends to be in one of four possible states at any time: Full Recovery, Early Recession, Full Recession, and Early Recovery. 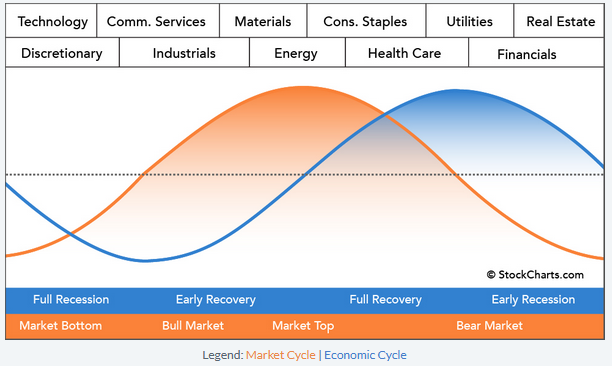 In which state is the US economy now? Macroeconomic data such as consumer confidence, industrial production, and interest rates suggest it may be the end of the Full Recovery state and about to enter the Early Recession state. In this state of the economy, consumer expectations are declining, industrial production is flat to falling, and the US yield curve is flattening or already flat.

Data from the St. Louis Federal Reserve Bank tends to back this up. University of Michigan consumer sentiment data has been decelerating since October 2017 but did reach a high point for 2019 in May. Annual US industrial production growth peaked in September 2018 and dipped below 1% in April 2019. Finally, parts of the US yield curve are flat or even inverted (where short-term interest rates are higher than long-term interest rates). For example, the 10-year US Treasury yield is below the 3-month note yield and only about 25 basis points over the 2-year bond.

Where Are Investors Likely to Position Portfolios

The current equity bull market could go on for a while yet, but the macroeconomic indicators cited above suggest now may be the time to look at more defensive sectors. One easy way to play this is with Select Sector SPDR ETFs. Investors can use Finscreener.org to see key fundamental and performance indicators for these funds easily.

Defensive sectors like consumer staples (XLP), health care (XLV), utilities (XLU) and financials (XLF) have all underperformed the broader S&ampP 500 index in 2019 compared to more pro-cyclical sectors like consumer discretionary, technology and industrials that have all outperformed the full index. The relatively weaker performance of defensive names so far in 2019 suggests the Early Recession state of the economy has not started yet, but the next six to twelve months will be revealing.